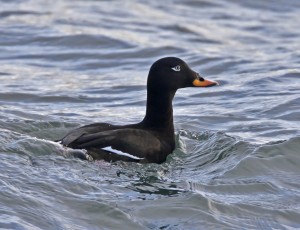 Two common and widespread seaducks – Velvet Scoter and Long-tailed Duck – have been added to the IUCN Red List on account of dramatic declines in their numbers.

At the end of 2011, new information on the abundance of seaducks and other waterbirds in the Baltic Sea was released. This identified that in particular the apparent declines of Velvet Scoter and Long-tailed Duck were of concern at a global scale, since the majority of the world populations of these two species winter in the Baltic Sea, where numbers have apparently declined by around two thirds. As a result, these two species have now been added to the IUCN Red List of Threatened Species. Velvet Scoter is listed as Endangered, and Long-tailed Duck is listed as Vulnerable. Discussons on the uplisting of these species can be found on BirdLife International’s Globally Threatened Bird Forum – Velvet Scoter and Long-tailed Duck.

This is a very worrying development, and many questions remain about the scale of these declines and their causes. It is essential that we rapidly improve our understanding of the numbers, trends, distribution and movements of these and other seaducks in order to support research into the causes of decline and further conservation actions.