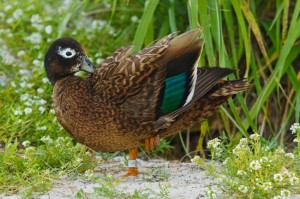 Twenty-eight Laysan Ducks are settling into a new home within the northwestern Hawaiian islands as part of a reintroduction programme lead by Michelle Reynolds to establish a new colony of these critically endangered ducks.

The ducks were translocated in early September 2014 from Midway Atoll to Kure Atoll, located about 1,350 miles northwest of Honolulu and part of the historical range of Laysan Duck. Kure Atoll was chosen as a reintroduction site because rats have been eliminated there and the site has also undergone habitat rehabilitation since 2007.

Further details can be found here, with images from the project here.

Thanks to Michelle Reynolds, Kim Uyehara and Annie Marshall for this news item.