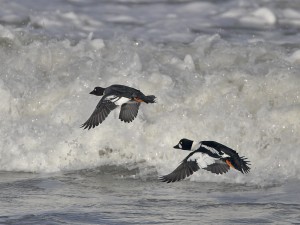 A new project that aims to investigate the population structure of Common Goldeneye wintering along the northwest European flyway has been launched by Diego Pavon Jordan and Aleksi Lehikoinen of the Finnish Museum of Natural History. It is intended that this information will also be used to investigate the mechanisms of range shift, i.e. which cohorts are contributing to the overall population scale shift.

The project will use photographs of flying Common Goldeneye to assess the age and sex of individual birds; birds can be identified in flight based on wing patterns as adult males, adult females and young birds. Data on habitat types and flock size are also required. Diego and Aleksi are seeking collaboration with people able to photograph Common Goldeneye in the NW European flyway during January 2015.

Further details about this project, including instructions for collecting data, can be found here. We encourage as many DSG members as possible to participate and/or spread the word about this project among their national networks of waterbird counters.