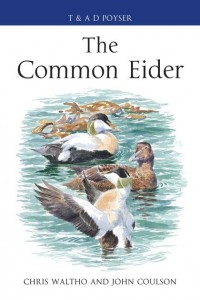 Congratulations to Chris and John on the publication of their monograph the Common Eider.

‘Eider’ is one of the most widely recognised bird names in the world, with the species probably best known for the insulation properties of its down, one of a number of cold-tolerance characteristics of this species. A wide distribution across the northern hemisphere, together with its important cultural significance to northern peoples, results in it being one of the best studied waterfowl in the world.

This book, the first English-language monograph of this arctic-adapted sea duck, delves deep into the biology of the Common Eider to provide a global perspective of the species. It takes the opportunity to critically examine and comment on many aspects of eider biology, especially relating to their breeding cycle. There is a focus on the authors’ work in western Scotland and north-east England, close to the southern edge of the duck’s breeding range, with many of these results published here for the first time. Topics as diverse as marine adaptations, biometrics and subspecies, distribution, the prey spectrum, parasite cycles, predator impacts, clutch size variation, duckling rearing mechanisms, survival rates, the impact of crowded living and human exploitation are described. Additionally, a comparative overview of the three Somateria and one Polysticta eider species’ is provided by Russian sea duck biologist Diana Solovyeva.

The book can be ordered from Bloomsbury Publishing.