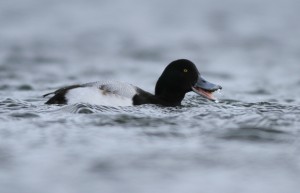 During the 2015 International Waterbird Census a special effort will be made to survey Greater Scaup throughout the flyway of the West European population. Typically, this species is under recorded during the IWC, so this additional effort at sites not normally surveyed will allow an update of the population size estimate. The key to the accurate assessment of this population will be complete coverage from the Netherlands, Germany, Poland, Denmark, Sweden, France and the UK, where the majority are concentrated during mid winter.

The key period for counts is the 16-18 January 2015. Surveys will be undertaken using the most appropriate method for the particular wintering site (i.e. boat, aerial or ground counts).

This special effort for Greater Scaup has been organised by Lukasz Lawicki and Dominik Marchowski of the West Pomeranian Nature Society. Please contact Lukasz for further details.