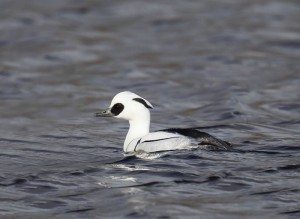 Many bird species are showing distributional change in response to global warming. Such is the case of the Smew, a rare and protected duck species in Europe, whose wintering population has redistributed north-eastwards in Europe due to milder winter conditions in the last 25 years. New research, compiled by scientist from 16 countries, shows that Special Protection Areas (SPAs) scheduled under the EU Birds Directive facilitate such distribution changes throughout the entire species range.

“Currently, one third of the total population winters in north-eastern Europe, compared to 6% two decades ago. Furthermore, population growth rate in this region was also twice as fast inside EU Birds Directive’s SPAs compared to those outside over the last 25 years”, says Diego Pavón Jordán from the Finnish Museum of Natural History.

Thus, well designed protected area networks can mitigate the effects of climate change on biodiversity by safeguarding high quality habitat as species adopt new distributions. These findings confirm that the existence of SPAs assists species to cope with climate change.

However, the results also highlighted severe gaps in the SPA network, especially in northern parts of the wintering range. Many countries designated their SPAs more than 20 years ago, when no account was taken to accommodate such rapid environmental and distributional changes as we see now. More than eight out of ten Smew wintering in Latvia and Sweden currently do so in unprotected areas, and in Finland nearly all individuals winter outside the SPA network.

“As climate-driven distribution shifts will continue in the future, there is an urgent need to update national Special Protection Area networks, not only for the Smew but also for many other species, in order to maintain the effectiveness of these networks and species conservation status”, says Aleksi Lehikoinen from Finnish Museum of Natural History.

The authors also emphasize that it is equally important to maintain SPAs in ‘traditional’ parts of the wintering range to the south-west since unpredictable harsh winter conditions may still force birds towards these areas in some years. Moreover, there is a need to improve the monitoring network especially in north-eastern Europe, where new wintering sites are becoming available. Maintaining a comprehensive network of protected areas throughout the entire range is the ultimate goal of the EU Birds Directive and the Natura2000 network, but more effort and resources are still needed to achieve this goal.

These results are based on data from the International Waterbird Census from 16 countries since 1990 and the findings were published in the scientific journal Diversity and Distributions.