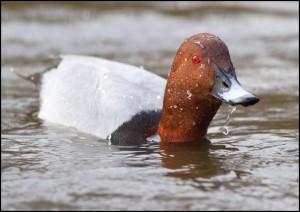 A consortium of conservation NGOs, lead by BirdLife International, have today released a Red List for European birds. This important priority setting tool follows IUCN criteria and is available for the biogeographic region of Europe as well as the 27 countries that currently form the European Union.

Seven species of duck are found on the European Red List, some of which are well known conservation priorities but others are being recognised as such for the first time. White-headed Duck is Endangered, whilst Marbled Teal, Common Eider, Long-tailed Duck, Velvet Scoter, Common Pochard and Greater Scaup are classified as Vulnerable. Red-breasted Merganser and Barrow’s Goldeneye are listed as Near Threatened.

Of these, it is perhaps Common Pochard that is the least expected to feature, but widespread declines across much of its wintering and breeding areas are now starting to give real cause for concern. Little is currently understood about threats and this species will need to become a greater focus for researchers and conservation effort.

In addition, within the EU27, Steller’s Eider was classified as Endangered, Garganey, Wigeon and Pintail as Vulnerable, and Ruddy Shelduck as Near Threatened.