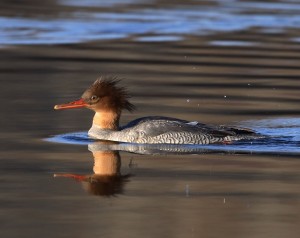 A census of wintering Scaly-sided Mergansers, organised by the China Birdwatching Association, was carried out in December 2014 to February 2015. The census covered more than 200 sites in 19 provinces, autonomous states and municipality cities within the three month period, and to date is the largest census of a wintering wildfowl species conducted in China. It covered areas in 10 river catchments, including the Yangtze River, Yellow River, Huaihe River and Zhuajiang River. Overall, a total of 441 Scaly-sided Mergansers were encountered at 29 sites (140 males and 301 females or juveniles).

The census was a large collaborative effort, involving 31 birdwatching societies, four birdwatching clubs from universities, seven local birdwatching groups, and staff from three reserves and wetland parks. Many of these birdwatchers, researchers and experts went to the field as volunteers and also collected a lot of information about the surrounding environment and conducted interviews with local people.

Thanks to Jing Li (China Birdwatching Association) for this news item.