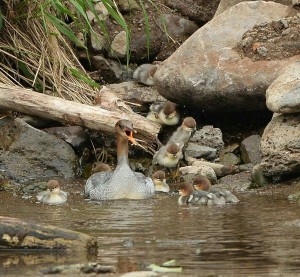 2015 has proved to be an extremely successful year for breeding Scaly-sided Mergansers using artificial nest sites in Russia and China.

Just under 2,000 pairs of this Endangered duck breed in far east Russia and neighbouring parts of China and North Korea. Sadly, logging of large trees along rivers in areas of breeding habitat has reduced the number of natural cavities available to the hole-nesting mergansers. Artificial nest-box programmes were initiated in Russia in 2000 and in China in 2005 in an attempt to provide alternative  nesting sites.

Excitingly, 2015 saw the 1000th ducking hatch from an artificial nest in Russia, with the total to date standing at 1,032 ducklings; and, after 10 years of failure, the first results from the programme in China were seen at a breeding site in Changbaishan, where 11 ducklings hatched successfully. Curiously, the nest-boxes in China are made from recycled car battery covers! 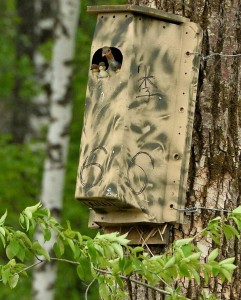 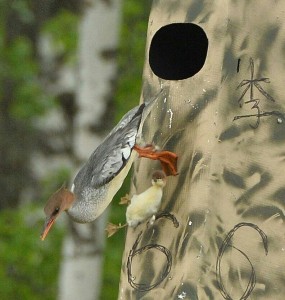 The Russian programme has enabled much new research on the species and the successfully reared ducklings represent a major contribution to the species’ survival. It’s hoped that the ducklings hatched in China will similarly go some way towards ensuring the species’ continued presence in the country after large decreases seen there in recent decades.

Big congratulations to the teams involved!