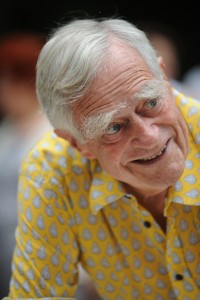 The Camargue has been in mourning since Luc Hoffmann passed away peacefully on July 21st 2016.

The grandson of Fritz Hoffmann-La Roche, who founded the Hoffmann-La Roche pharmaceutical company at the end of the XIXth century, Luc Hoffmann developed a passion for wildlife, especially birds, instead of simply following the family footsteps. He published his first paper on migratory waders in Der ornithologische Beobachter in 1941, and defended a PhD on Common Tern plumage patterns after the end of WWII.

This is also when he discovered and fell in love with the Camargue, where he bought the Tour du Valat estate in 1947. The foundation of the ‘Station de recherche biologique de la Tour du Valat’ in 1954 is likely his most famous achievement, with the Institut de Recherche still being a prominent scientific centre today, renowned around the world for its work on wetlands and waterbirds, especially those based on long-term ringing studies.

Beyond the Camargue, Luc Hoffmann was also a pioneer and champion of wetlands and waterbird conservation, and one of the most important people in this domain during the XXth century with a huge legacy in the way we consider and protect these birds and habitats today. With Sir Peter Scott and others he founded the World Wildlife Fund (WWF) in 1961, of which he was Vice President until 1988. He held the same position at the International Union for Conservation of Nature (IUCN) during the 1960s, when he was also the President of the International Waterfowl Research Bureau (IWRB), now Wetlands International.

Luc Hoffmann also contributed significantly to the establishment of the Ramsar Convention in 1971, as well as the protection of many iconic wetlands such as the Parque Nacional de Doñana in Andalusia, the Neusiedler See at the border between Austria and Hungary, the Hortobagy National Park in Hungary, the Prespa lakes in Greece, Albania and Macedonia and the Parc National du Banc d’Arguin in Mauritania. Few men have achieved so much in their life, particularly whilst also maintaining such a low profile, than Luc Hoffman. For all of his actions he received countless medals and honours. 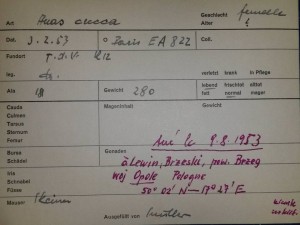 Besides these large-scale achievements to conserve wetlands and waterbirds, the duck community also owe him a special thank you for the work he did with his team at Tour du Valat on various Anas and Aythya species in the Camargue: whilst Tour du Valat is particularly famous for its research and monitoring of flamingo and heron populations, ducks were also among the main focuses of the station when it was created. The Tour du Valat crew alone ringed over 80,000 ducks between 1950 and 1975 on the Tour du Valat estate alone, more than in most European countries over the same period! Luc Hoffmann also had a special interest in lead poisoning issues, with many of these ducks also being x-rayed. As a result, he was among the first scientists to recognise the devastating effects of lead shot ingestion by these birds, and even attempted some original experiments to reduce lead ingestion rates through the spreading of gravel onto the sediment of waterbodies. The publications he and the Tour du Valat scientists produced on the subject played an important role in the later ban of lead ammunition for shooting over wetlands in France.

A farewell ceremony will be held at Tour du Valat on 19th August 2016. Unfortunately, no biography in English has been published but the readers of French will learn a lot about the man and his achievements in ‘Luc Hoffmann, l’homme qui s’obstine à préserver la terre – entretiens avec Jil Silberstein‘ by Editions Phébus (2010).