During the meeting, chaired by the BPTF Chair Prof. DING Changqing from Beijing Forestry University, a review of progress with the implementation of the Baer’s Pochard action plan was undertaken, and members contributed updates on progress from their own country/region or study. 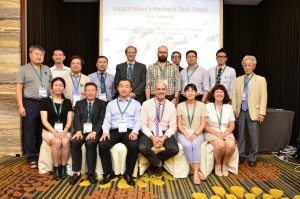 recommendations, to supplement those actions already identified in the action plan, or underline the most important of those that need action in 2017, were made to EAAFP Partners during a subsequent plenary session of MOP9, as follows:

3) Manage hunting, particularly during the spring, at Khasan (Russia) in such a way that the potential impact on Baer’s Pochard is minimised (e.g. by providing hunters with information about Baer’s Pochard identification and preferred habitat).

4) Financially support the key survey and research needs identified in the SSAP.

5) Finalise and implement the new upgraded legal status of Baer’s Pochard in China (1st class protection) before the 2017 breeding season.

6) Provide support to the BPTF for an international SSAP implementation meeting.

Furthermore, some new actions for the BPTF were also identified:

1) Enhance survey effort and coordination, particularly during the breeding season and including collaboration with bird watchers.

2) Compile information on key stakeholders and policies in order to enhance the development of a conservation response.

3) Undertake a feasibility study for the potential to reinforce the population through the release of captive-reared birds.

4) Provide information and guidance on surveys, identification and other monitoring issues to researchers in the Rason area (and at other potential sites in DPRK). 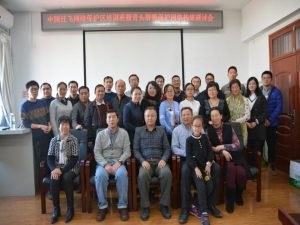 Further information about progress with Baer’s Pochard conservation can be found in the BPTF report to EAAFP MOP9.