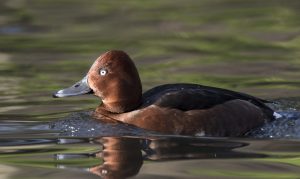 BirdLife International’s Global Species Programme are seeking information and comment from both professional and amateur birdwatchers and conservationists to inform a review of the IUCN Red List status of three duck species: Maccoa Duck, Ferruginous Duck and White-headed Duck.

Topics for each of these species are now open for discussion on BirdLife’s Globally Threatened Bird Forum where interested parties can contribute information relevant to the assessment of the species’ threat status and conservation.

The closing date for preliminary discussions is 17 July 2017.

The species is currently considered as Near Threatened. However, there does not appear to be any evidence that suggests the species presently approaches the thresholds for listing as a Threatened species under any criteria. It is proposed that the species is downlisted to Least Concern.

The species is currently listed as Endangered on the basis that mid-winter counts have suggested that the population has undergone vary rapid declines. However, there has been some difficulty in deciphering population trends due to, for example, mismatches in population estimates and the possibility that many individuals may be missed during winter counts. Information and comments are sought regarding the species so a better assessment of the species’ global Red List status can be made.