On 19-20 March 2018, delegates from ten countries gathered at Hengshui Lake National Nature Reserve, in Hebei Province, China, for the first international workshop on the conservation of the Baer’s Pochard. This crucially important workshop was coordinated by the East Asian – Australasian Flyway Partnership (EAAFP)’s Baer’s Pochard Task Force, which was launched in 2015 in response to the catastrophic (>90%) decline in the abundance of this species. 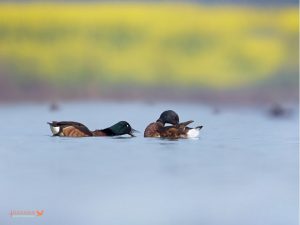 Hengshui Lake National Nature Reserve provided the perfect setting for the workshop as it is the most important known site in the world for this Critically Endangered duck. During the workshop, delegates from Bangladesh, China, Democratic People’s Republic of Korea, India, Japan, Mongolia, Myanmar, Republic of Korea, Russia and Thailand heard from senior Chinese local and national government officials, academics and international experts, discussed urgent conservation priorities and agreed the ‘Hengshui Declaration‘.

Highlights from the declaration include:

The full declaration text can be found here.

Professor DING Changqing, Chair of the Baer’s Pochard Task Force said: “The Baer’s Pochard is a jewel in the crown of East Asia’s natural heritage. And with a distribution concentrated in China, we have a unique responsibility to ensure its survival in the wild. I am delighted that the State Forestry Administration has recommended that Baer’s Pochard be added to the list of species with Class 1 protection in China. If approved, this will mean severe penalties for anyone killing or endangering this bird and will be a significant step forward towards ensuring the species’ long-term survival”.

The full press release for the workshop can be viewed on the EAAFP website.