On 28 May 2018, Li Feng, a researcher and bird surveyor from Hengshui University found a female Baer’s Pochard with ducklings at Hengshui Hu (Lake) National Nature Reserve in Hebei Province, China. This is the first confirmed breeding of this Critically Endangered diving duck anywhere in the world in 2018 and is almost certainly a direct result of the meaningful conservation measures recently carried out by the local government and nature reserve staff, supported by the Sino-German Hengshui Lake Conservation and Management Project, following the first international workshop of the Baer’s Pochard Task Force at Hengshui Hu in March 2018. 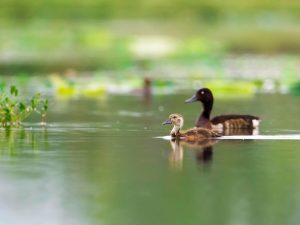 In the last five years it has become clear that Hengshui Hu in Hebei Province is the most important known site in the world for this species, with more than 300 recorded during spring migration, several wintering and a few pairs spending the summer. However, due to a combination of fluctuating water levels during the breeding season, illegal egg collection and disturbance by electro-fishermen and tourist boats, there has been no evidence of succcessful breeding in recent years. Since 2017, regular monitoring of the site for Baer’s Pochard and targeted conservation actions have been initiated through the Sino-German Hengshui Lake Conservation and Management Project.

Mr Yuan Bo, Director of Hengshui Lake National Nature Reserve, said: “Hengshui Lake is the most important known site for Baer’s Pochard in the world. With that great honour comes a great responsibility. With the support of the local government and national and international partners, we have implemented a series of conservation actions aimed at reversing the decline of this “Critically Endangered” diving duck and we are delighted that our efforts have been rewarded so quickly. Our aim now is to build on this success to ensure successful breeding becomes an annual event”.

Professor Tian Guang, President of Hengshui University added: “Hengshui University is delighted to be part of the team working to protect the Critically Endangered Baer’s Pochard. Our team, led by Dr Wu Dayong and Li Feng, has been monitoring the waterbirds at Hengshui Hu weekly since March 2017 and, in response to this success, we have arranged for a team of more than 40 volunteers to monitor the breeding progress in 2018”.

The full press release can be found here.