The not-so-Common Eider – can you help?

My name is Alex Nicol-Harper and I am a PhD candidate at the University of Southampton, in collaboration with the Wildfowl & Wetlands Trust, studying population dynamics of the Common Eider. My academic background is in biodiversity conservation, with some experience of matrix population modelling (see paper: https://link.springer.com/article/10.1007/s10144-018-0620-y). 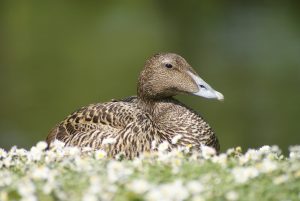 In this project we will be synthesising existing data in order to investigate the relationships between vital rates and population growth, including transient dynamics. Common Eider, like other seaducks, are relatively long-lived, allowing us to model changing reproductive success with age – including fairly frequent breeding deferral (skipping a year). We are also hoping to contrast the life histories of Common Eider, which live on saltwater year-round, with those of the other seaducks which breed on freshwater. Good estimates and predictions of population dynamics of Common Eider are important, since the species was uplisted on the IUCN Red List to Near Threatened in 2016, with the European population classified as Vulnerable.

The first stage of our project is a meta-analysis of vital rates, where we will draw together all available knowledge on eiders in order to inform our general population matrix model. If you have any (particularly unpublished) data on: lifespan, sex ratios, clutch size, hatching success, fledging success, duckling survival, juvenile survival, recruitment/age at first breeding, adult (especially male!) survival, etc. – for (Common) eiders, or other species of seaduck – please do get in touch! If there are data in non-digitised logbooks, we are definitely still interested – and would love to hear from anyone interested in helping to digitise such information, perhaps as a university project? We hope our findings will inform the conservation management of eiders, and also that of other seaducks, for which there is generally less data available.

You can read more about my work and lab at http://fusionecology.org/FusionEcology/alexnicolharper.html. Also please feel free to follow me on Twitter @alexnicolharper for eider duck facts and updates!