Important progress made by the Scaly-sided Merganser Task Force

Sixteen delegates from the EAAFP Secretariat, People’s Republic of China, Republic of Korea and Russian Federation attended the 3rd workshop of the EAAFP Scaly-sided Merganser Task Force, held in Yueyang, Hunan, China on 5th December 2018. This included 11 Task Force members and a new member from Russia, Stepan Kirillin, Director of Anyuiskiy National Park in Khabarovsk, was nominated and accepted as a SSMTF member. The workshop included updates on conservation activities for both Task Force members and consultants. 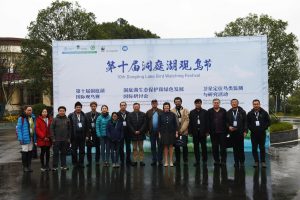 Workshop delegates reported that a National Action Plan will be developed in China in the near future. Delegates also highlighted the need for support from the Government of the Republic of Korea to develop a similar Plan for this state. Nial Moores, Birds Korea, reported interest from the government of DPR Korea in consultations regarding a National Action Plan, however there was no further discussion on this issue in the absence of a representative of this state. There is a need for the small funding support to develop a National Strategy in Russia.

Delegates agreed to undertake coordinated surveys of the world population within the entire breeding and wintering ranges in 2019-2021. The first surveys began immediately after the workshop in January 2019 in: (1) China, as a continuous initiative of Beijing Forestry University (now Center for East Asian-Australasian Flyway Studies – CEAAF) and the China Birdwatching Association; and (2) DPR Korea as a joint initiative of Birds Korea, Hanns Seidel Foundation, CEAAF and Bastak SNR. Spring surveys in Russia will receive financial support from BFU/CEAAF. 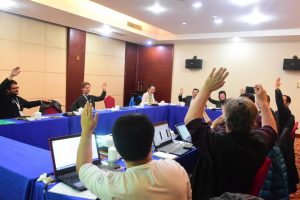 Delegates also voted to prohibit the use of back-pack harnesses for fitting tracking devices to Scaly-sided Mergansers because this method is known to be a cause of mortality in diving ducks.

Further information about the SSMTF can be found on the EAAFP website.

With thanks to Diana Solovyeva, SSMTF Coordinator, for this news article.