We are pleased to announce the scientific programme and three exciting plenary presentations.

The scientific programme will focus on seven key themes: 1. Population dynamics and trends – an overview of the European situation, 2. Habitat management – dealing with changes and identifying future requirements, 3. Monitoring methods, 4. Migration and wintering ecology, 5. Sustainable use of populations, 6. Ducks in the marine environment, 7. Conservation and management of populations – clarifying future priorities for action

A poster session will also be held.

On Monday 16th April there will also be a seminar focusing on sea ducks and marine renewable energy. The programme for this seminar is available here. 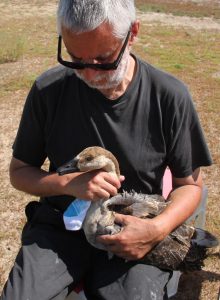 A freshwater and sea duck freak for as long as he can remember, after a BSc and a PhD obtained up to his knees in quaking peat in mid-Wales (a magnificent site for breeding Teal!), Tony worked for the Nature Conservancy Council there for many years, before moving to NCC in Inverness, Scotland in 1984.  Two expeditions to Greenland convinced him to return to waterbird research at the Wildfowl & Wetlands Trust at Slimbridge in an NCC-funded research position, later became Acting Head of Research there.  He moved to Denmark in 1993 where he has lived ever since, now Professor of Waterbird Ecology at the Department of Biosciences at Aarhus University, Denmark and visiting professor at the Chinese Academy of Sciences in Beijing.  In the course of his studies, Tony has had the outrageous good fortune to have caught such diverse species as Scaly-sided Mergansers, Steller’s Eiders and moulting Common Scoters, but gets just as excited about Common Eider, Teal and Wigeon and frankly much prefers getting cold and wet in a duck trap than dealing with his e-mail backlog.  However, he still feels deeply privileged to have the good fortune to be able to undertake avian research to support conservation management actions.  When he grows up, he would like to be Roy King. 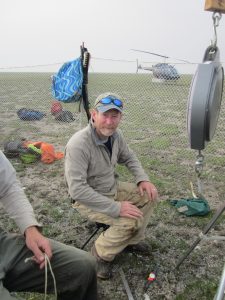 Scott McWilliams is a Professor of Wildlife Ecology and Physiology in the Department of Natural Resources Science at University of Rhode Island.  Prior to coming to URI, he was a Postdoctoral fellow at University of Wisconsin (Madison). He earned his PhD from University of California at Davis where he studied the physiological ecology of arctic-nesting geese, and his MSc from Iowa State University where he studied the behavioural ecology of a threatened species of salamander. Scott earned his BSc in Biology from Hiram College (Ohio). His research primarily focuses on the nutrition, physiology, and ecology of wild vertebrates, with an emphasis on migratory birds of conservation interest. Current research topics include habitat use, diet, and nutrition of arctic-nesting geese, seaducks, and migratory songbirds; forest management to support healthy bird populations; exercise physiology of migratory birds; effects of climate change on migratory birds; and how offshore wind farms affect migratory seaducks and seabirds. When he grows up, he would like to be as charming as Tony Fox! 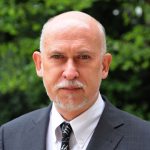