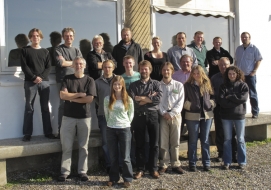 During 22-25 September 2010, 26 ornithologists from Iceland, Sweden, Finland & Denmark, met at a start-up workshop at Kalø, hosted by the National Environmental Research Institute at Aarhus University, Denmark. The workshop discussed current conservation issues and potential adverse and advantageous effects of climate change on duck populations in the Nordic/Baltic region. The key issues identified for the network (with their outcomes so far achieved within the life of the project) were to:

2) Establish the current status of two vital quarry species (Mallard and Common Eider) in the Nordic countries (both the subject of published scientific publications driven by NOWAC PhD students in the journal Ornis Fennica),

The conference in Öster Malma was hosted by the Swedish Hunters Association and the primary focus was the duck flyway populations breeding, moulting, staging and wintering in the Nordic region. Its aim was to update their conservation status, and identify gaps in current knowledge concerning their numbers and site use. The conference focused on exploring to what extent short-stopping of duck populations in the Baltic region are sufficiently covered by current national and internationally coordinated monitoring programmes, such as the International Waterbird Census (IWC). Although the conference focused on birds breeding in the Nordic areas, because of the long-distance migratory nature of many of these species (which winter in south-western Europe and stop over in different parts of central Europe) representatives from France, the United Kingdom, Hungary and the Czech Republic were also present at the conference. Participants presented relevant research in the form of posters or oral presentations, after which results and implications were fully discussed. Towards the end of the conference, the participants were divided into three workgroups on the following topics:

3) Ecosystem effects on food abundance and quality and population change of ducks.

These workgroups continued to produce articles reviewing our current knowledge and contributed to developing three core themes for immediate actions (with outcomes so far) to determine the:

2) Effects of climate change on waterbird demography (published as a manuscript in Wildlife Biology and presented as a poster at the British Ornithologists Union Demography Conference in Leicester, United Kingdom, in March 2013),

3) Interacting effects of climate, land-use and fertiliser use on waterbirds (resulting in two major publications in PloS One and Ecosystems, but continuing on-going analyses).

NOWAC took advantage of the gathering of many delegates at the 3rd Pan-European Duck Symposium in April 2012 in Jindřichův Hradec, Czech Republic to hold a one day briefing workshop, to coordinate actions and update on progress on projects and development amongst all participants. Two PhD students presenting work from the NOWAC activities (Lars Dalby and Irena Tomankova) won prizes for their contributions as spoken and poster contributions to the Symposium and the synergy between the Symposium and the NOWAC workshop proved excellent in making linkages across the flyway outside of the Nordic states.

Conference 2: Effects of a changing World on Migratory Waterbirds

The second conference was held in Trondheim in March 2013, hosted by NINA (Norwegian Institute for Nature Research), and the key issues were to:

1) Determine the status and abundance of all ducks in the Nordic States as a baseline, but to also encourage collaboration, best practice in research and monitoring and planning for common reporting  in the future (work in progress),

3) Define and better understand the phenomenon of waterbird ʺshort-stoppingʺ (a manuscript has been published in Journal of Ornithology).

The focus of the second conference concentrated more specifically on climate change issues, developing upon themes initiated in the first conference, and had a wider geographical scope, including both American and Eurasian perspectives.

Both conferences also addressed applied aspects, in particular how international conventions, EU directives, national legislation and site-safeguard programmes resulting from these might need to be reshaped in order to appropriately monitor, manage and conserve duck populations in a globally warmed and changing world, recently encapsulated in a species analysis for the Smew published in Diversity and Distributions.

NOWAC also took advantage of the gathering of many delegates at the 5th International Sea Duck Conference, held in Iceland in September 2014, to hold a briefing workshop which was planned as a final wrap-up meeting. However, NOWAC seems very unwilling to die and there will be another gathering of many of the members at the 4th Pan-European Duck Symposium, to be held in Finland in April 2015. We expect to pull all the results of our activities together and plan for taking the network forward with particular emphasis on finding funding for continuing the momentum and supporting joint projects.