Monitoring the sex ratio of ducks in the Western Palearctic

As many duck populations in the Western Palearctic are undergoing rapid changes in distribution and/or numbers, and relatively little is known about their population demography, it would be advantageous to reinvigorate the routine collection of sex ratio data across Europe, North Africa and Southwest Asia. Based on the success of the January 2016 sex ratio assessment of Common Pochard, it is clear there is much interest in this among waterbird counters and bird watchers and that much data can be easily collected during standard waterbird counts or bird watching activities. 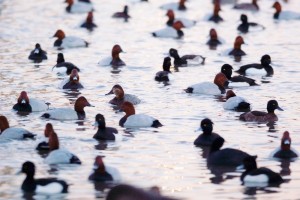 It is well known that many wintering duck flocks exhibit considerable differences in overall sex ratio and that a greater proportion of the males are found to the north. Males are dominant over females and are therefore able to occupy more favourable wintering areas closer to the breeding grounds, forcing the sub-dominant females to move further afield. Males also migrate away from the breeding areas before the females, giving them a further head start. Partly as a result of the females’ more strenuous migration, and also their increased level of predation during the incubation period, the sex ratio in the population is typically biased towards males even though sex ratios are near unity at hatching. The collection of sex ratio data can provide useful information on the population structure and even a crude assessment of relative changes in survival rates between the sexes.

In January 2016 an assessment of the Common Pochard sex ratio was carried out, with the sexes of 101,979 Pochard recorded in 28 countries across Europe and North Africa. Over 600 bird watchers and waterbird counters took part, mostly on the core weekend (16th & 17th) that coincided with the International Waterbird Census (IWC). During the IWC weekend a total of 41,277 Pochard were sexed. The number of birds sexed within each country are here.

The final results were published in a paper in Wildfowl in 2017.

Many thanks go to all waterbird counters and birdwatchers who took the time to record sex ratios during their counting or bird watching activities. Thanks also go to those that helped facilitate data storage and made their online data portals available to capture sex ratio data.

We are seeking participation from waterbird counters and bird watchers across Europe, North Africa and Southwest Asia to help collect sex ratio data for all ducks where sex can be determined in the field. We are asking counters to simply record the number of males and females in flocks that they observe. This can be carried out as part of the next International Waterbird Census (usually the central weekend in January) or, if preferable, during a separate visit at some other time in January. We also welcome sex ratio counts at other times of the winter.

The sex of every single bird in the flock is not required; however, please do try to obtain as large a sample as possible. Please record:

It is important we collect data from a good selection of habitats and different flock sizes as males tend to predominate at the best quality sites. Although more time is needed to record the sex ratio of large flocks, it is important to get these data so please do try to at least sample large flocks at your sites. If you know of sites holding ducks that are not routinely counted as part of a national waterbird count scheme it would be great if you could try and also visit them during January to collect sex ratio data (and please count all the waterbirds too if you can!). Sex ratio data can be submitted using an online recording form which can be accessed below. However, if your national waterbird count scheme already has a system in place to collect sex ratio data, please submit your data there in the normal way as we can access it via your national organiser.

to submit your data

Sex ratio counts can also be submitted via a number of generic national or regional bird recording platforms, including BirdTrack and Observation. Please make sure that you provide an accurate location and information on the habitat type. It’s also important to record the total number of birds assessed (i.e. the total number of males & females sexed) which can be entered in the comments section.

We are also interested in sex and age ratio information from hunting bags and to assist with this there are now new guides available on how to sex and age ten commonly hunted European ducks. These are the guide produced by Jean-Baptiste Mouronval and ONCFS in 2014 and an English translation.