Numerous expert groups are established under various global or regional conventions, agreements and other collaborations to coordinate work on ducks of conservation concern or other specific issues. Not all of these are affiliated with the DSG, but they are listed here in order to provide a comprehensive list of such groups.

The Marine Waterbird Working Group of the African-Eurasian Waterbird Monitoring Partnership works to develop and coordinate population-wide monitoring of seaducks and other waterbirds wintering at sea, including divers and grebes, in order to underpin the International Waterbird Census and species focused conservation efforts. Find out more about the MWWG, and access relevant resources and information. 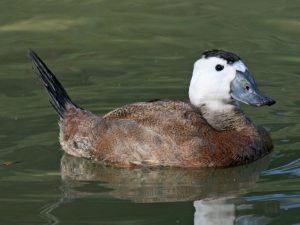 The AEWA White-headed Duck IWG oversees the implementation of the WhD Action Plan. Further details can be found here.

The East Asian – Australasian Flyway Partnership’s Baer’s Pochard Task Force is working to implement the Action Plan for this Critically Endangered species. Further information about the BPTF can be found here.

The East Asian – Australasian Flyway Partnership’s Scaly-sided Merganser Task Force is working to implement the Action Plan for this Endangered species. Further information about the SSMTF can be found here.

The Black Duck Joint Venture is a North American Waterfowl Management Plan Conservation Partnership focused on restoring the population to 640,000 breeding birds through a coordinated monitoring, research, and communications programme.

The Pintail Action Group oversees research and management of North American populations of Northern Pintail. They produce occasional newsletters and those for 2010, 2012 and 2015 can be downloaded here.

NOWAC is an established network linking research groups in the Nordic countries and elsewhere to synergise current research on waterbird ecology and the effects of climate change. Further details of NOWAC achievements can be found here.