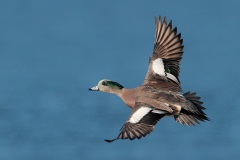 The full report and other information can be found at Flyways.us. A further useful summary of trend values for individual species is available from Ducks Unlimited.